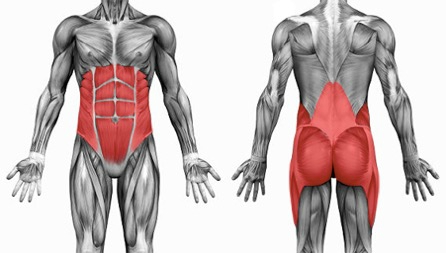 “Core” seems to be a hot topic at the moment; “core” has been tossed around in a variety of settings including group exercise, gyms, physio clinics and more. In fact, you’ve probably heard of it yourself, and maybe you’re wondering, ok I’ve heard so much about core exercises and so on, but what actually is the core?

The “core” is made up of several muscle groups including the transversus abdominis (TrA), multifidus, diaphragm and pelvic floor muscles (2). These muscles work together to produce stability in the abdominal and lower spinal region, as well as to support and coordinate movements of the limbs and spine more generally (2). The “core” may also include bigger muscle groups such as the rectus abdominis (aka the six-pack) and lower back muscles – however in a clinical sense we are usually referring to the smaller stabilising muscles (4).

If you’re more of a visual person, try picturing the “core” as a muscular box, comprised of the abdominals at the front, paraspinals and gluteals in the back, diaphragm at the roof and pelvic floor and hip girdle muscles as the bottom (3). The muscles within this box help to stabilise the spine and pelvis, as well as help to support the body during functional movements (3).

So, we’ve covered what the “core” actually is, but what is core stability and what do we mean by core exercises? Core stability typically refers to the active component of the stabilising system – in other words, tissues of the body that actually do something (1). These active components include deep (as in deep within the body) muscles that provide segmental stability (including TrA and multifidus), and/or the superficial (as in close to the surface) muscles (for example rectus abdominis aka the six-pack, and erector spinae) (1). These groups of muscles (aka the active components), work together in co-ordination with passive structures (such as the vertebrae of the lumbar spine) and control systems (such as neurological systems) to produce stability.

Why is it important?

Essentially, stability is crucial to allow movement, load transfer, and to protect the spinal cord and nerve roots (1). More specifically, core stability is important to support the body during physically demanding tasks (1). To provide stability and support for the spine, it is important to learn how to properly engage your core in a variety of positions and during functional activities (2). Essentially, having a strong and stable core will allow the trunk and limb muscles to operate from a stable mid-section. This can help to prevent difficulties and potential injuries resulting from poor and uncontrolled movement patterns (4).

Who can benefit from doing core exercises?

Short answer, everyone (pretty much)! Long answer – most people do not engage their core muscles consciously whilst performing functional movements and activities, and as such will benefit from learning how to effectively contract these muscles whilst performing the functional activities (2). In particular, many patients with low back pain demonstrate a reduced ability to use their core muscles for stability during functional movements, and also demonstrate a slower contraction of TrA – this in turn reduces the stability of the spine during movement. As such, patients with low back pain will likely benefit from performing core exercises to improve their control, strength and stability (3). As a result of improving core strength and stability, individuals will not only be able to progress their core exercises to continue to challenge themselves, but will also learn to engage their core during everyday movements (which is also important) – this can include bracing in standing and walking, and whilst performing lifting or carrying activities (3).

What kind of exercises can I do to improve my core strength and stability?

To begin with, it is important to learn how to actually contract the “core” properly.

Do this by exercising TrA activation: start by lying on your back with knees bent and feet flat on floor – then, place your index fingers on the bony part at the front of the hips (the ASIS) on each side – move the fingers about 2cm to the middle and down. To contract the TrA, think about the feeling of tightening your belt by one extra notch – this should be a gentle tightening which you will feel underneath your fingers. If the muscles underneath your fingers begin to dome, then you are contracting too much and are compensating with larger muscle groups. It should just feel like a gentle tightening under the fingertips. Once the ability to correctly perform this contraction has been achieved, you may progress to more challenging core and TrA activation exercises. Some examples of these are listed below.

Ideally, a core exercise program should be gradually progressed to ensure the contraction can always be completely properly.

We help pain and injury with physiotherapy for everyone from Rosebery, Mascot, Alexandria, Eastlakes, Eastlakes Beaconsfield, Maroubra and surrounding suburbs. We are proud to be the  provider of physiotherapy and massage therapy in Rosebery, Mascot, Alexandria, Eastlakes, Baeconsfield, Maroubra and surrounding areas. We are a proud provider of sports coverage of various clubs in Maroubra, Mascot, Paddington, Newtown and Ultimo.